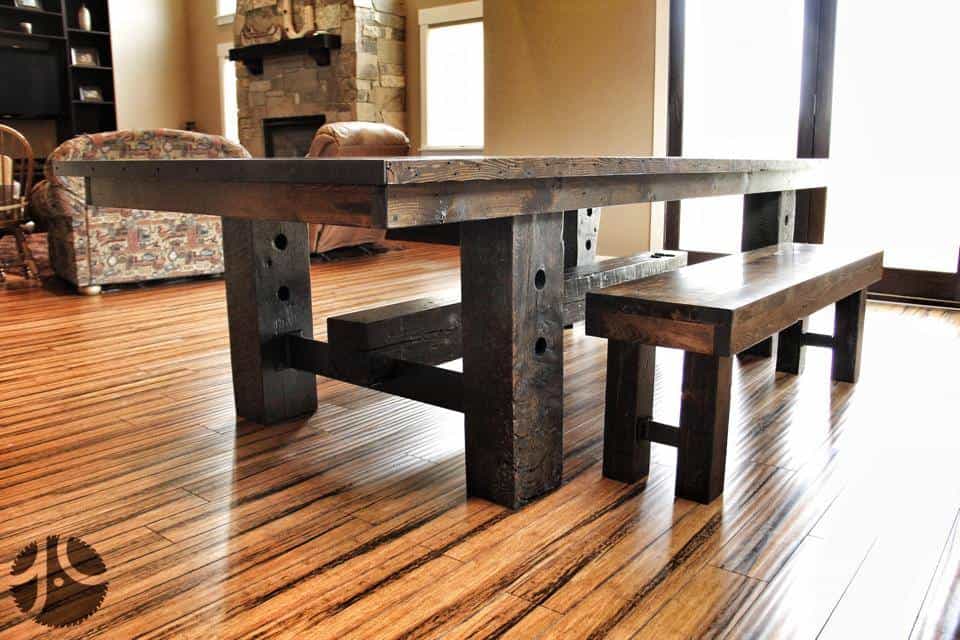 If this reclaimed wood farmhouse table could talk…

If this reclaimed wood table could talk it would have quite a unique story to tell. The table is well traveled with tales of its previous life. The first element you notice are the large oak timber legs that were once the structural grain bin supports from the legendary Globe Grain Elevator in Superior, Wisconsin.  The Globe was once the largest grain elevator in the world.  The large holes in each block were used to hold lateral cables in place; fastened with large washers and nuts to support the bin under the grain’s pressure when filled from the seasons plentiful harvest.

The other elements of the table each have their own tale. The boards that make up the table-top once supported the floors of the armory in downtown Minneapolis, MN. The exposed nail holes on the edges of the floor joist were the means by which the sub floor was fastened. The armory in downtown Minneapolis was the part-time home court of the Minneapolis Lakers from 1947-1959 before they moved to Los Angeles. The marks of age and character on its face because it brings unique one-of-a-kind character that is likely from added structure or electrical runs throughout the original building.

If this reclaimed wood table could talk about its trim or leg support pieces, it likely wouldn’t say too much because their previous life is unknown since the pieces were salvaged and preserved years ago by the owner’s of the property in Leith, ND where we were lucky enough to have received them.  But if we had the back story to share I’m sure it would be equally as thrilling and exciting as the rest of the table. Modern Farmhouse, with a Rustic Twist.